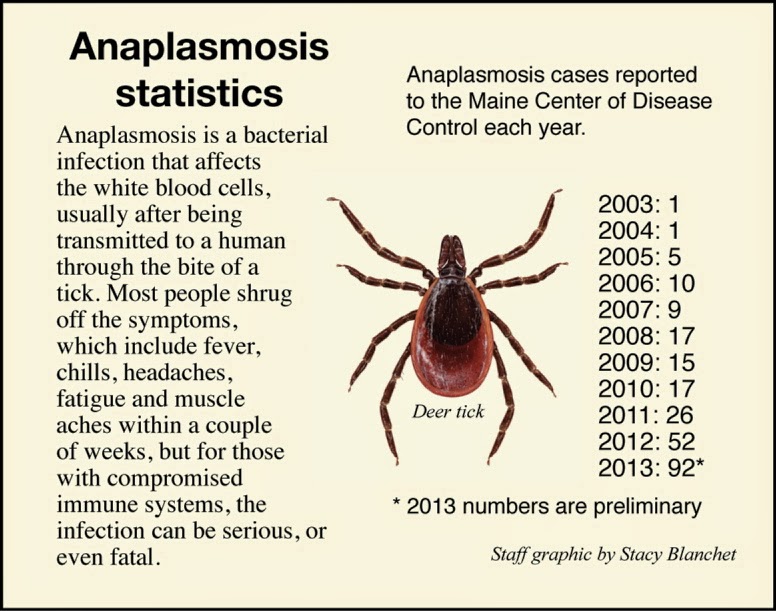 “Then you have to start thinking about different possibilities, such as viral or tick-borne diseases,” Borelli said. “It was in a summer month. Tick-borne diseases are always things we need to consider. And we learned she had had some tick exposure.”
Some of the blood work showed that the woman’s blood didn’t have enough white blood cells in it. Tests also revealed a high level of liver enzymes in the blood, most commonly seen when the liver is damaged or inflamed.
Taken together, the two things pointed to anaplasmosis.
A tick bite usually spurs thoughts of Lyme disease, but a recent rise in anaplasmosis has caught the attention of epidemiologists in the state."
PLEASE CLICK LINK ABOVE TO READ FULL ARTICLE 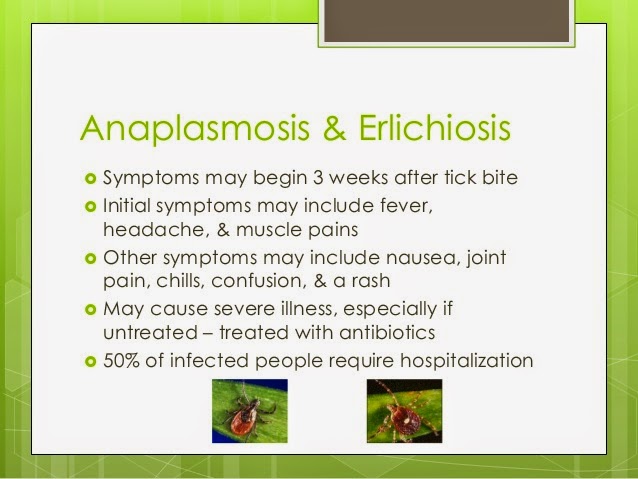 There are two kinds of ehrlichiosis, both of which are caused by tick-borne rickettsial parasites called Ehrlichia that infect different kinds of white blood cells. In HME (human monocytic ehrlichiosis), they infect monocytes. In HGE (human granulocytic ehrlichiosis), they infect granulocytes. HGE was renamed anaplasmosis in 2003. Ticks carry many Ehrlichia-like parasites that have not been identified yet. It is likely that the lone star tick transmits HME and that the deer tick transmits HGE.
Ehrlichiosis (HME) was originally thought to be only an animal disease. It was described in humans in 1987 and is now found in 30 states, predominately in the southeast, south-central, and mid-Atlantic states, Europe and Africa. Anaplasmosis (HGE)in humans was first identified in 1990 in a Wisconsin man. Before that it was known to infect horses, sheep, cattle, dogs and cats. It occurs in the upper midwest, northeast, the mid-Atlantic states, northern California, and many parts of Europe. Studies suggest that in endemic areas as much as 15% to 36% of the population has been infected, though often it is not recognized.

Diagnosis is limited by our current ability to test for only two species. Ehrlichia parasites multiply inside host cells, forming large mulberry-shaped clusters called morulae which doctors can sometimes see on blood smears. The infection still can easily be missed. The doctor may suspect ehrlichiosis/anaplasmosis in a patient who does not respond well to treatment for Lyme disease.

The treatment of choice for ehrlichiosis/anaplasmosis is doxycycline, with rifampin recommended in case of treatment failure. 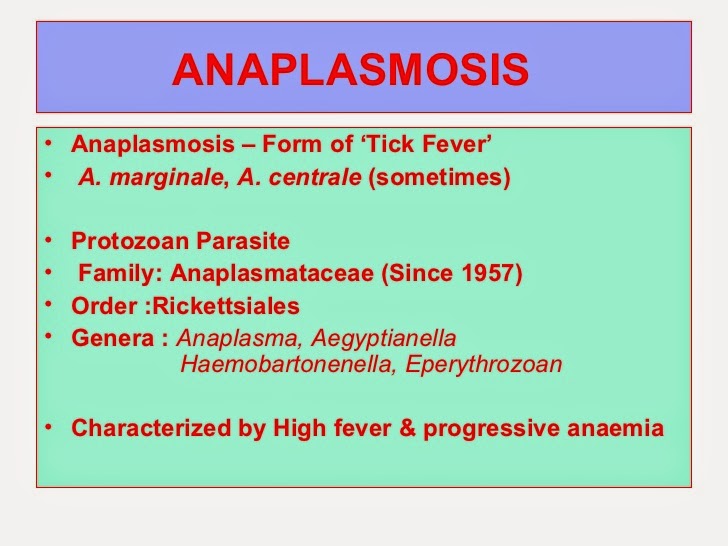 http://www.columbia-lyme.org/patients/tbd_ehrli-anapla.html
This site has additional details and information on Ehrlichiosis too.

Anaplasmosis
Overview
The first case of human anaplasmosis was described in 1990, when a Wisconsin patient developed a severe febrile illness following a tick bite and died two weeks later. Blood smears revealed clusters of bacteria within the patient’s neutrophils, similar to the morulae seen in monocytes with E. chaffeensis infection. However, cultures and serologic tests for E. chaffeensis were negative. Nevertheless, the patient’s clinical course suggested ehrlichiosis of some kind, and when several additional cases of the disease were reported in the northern Midwest in ensuing years, it was posited that a new species of Ehrlichia might be emerging. The new disease was tentatively given the name “human granulocytic ehrlichiosis,” or HGE.

Ultrastructure of A.phagocytophilum by transmission
electron microscopy. Photo by V.Popov, reprinted
from Dumler JS et al. Human granulocytic
anaplasmosis and Anaplasma phagocytophilum.
Emerg Infect Dis;11:1828-34.
In 1994, DNA sequencing studies revealed that the HGE agent was clearly distinct from E. chaffeensis but essentially identical to two previously known ehrlichial veterinary pathogens, E. equi and E. (Cytoecetes) phagocytophila. Under a new taxonomic scheme since implemented (see Introduction), these three organisms have been united as a single species within a new genus, Anaplasma. The new species is referred to as Anaplasma phagocytophilum, and the disease it causes is now known as human granulocytic anaplasmosis, or HGA.
Like Ehrlichia species, Anaplasma organisms are small, gram-negative and intracellular. A. phagocytophilum targets neutrophils, alters their function in the host, and forms morulae within vacuoles. Most of the damage it causes appears to be related to host inflammatory processes, as there is little evidence of a correlation between the number of organisms and host disease severity.
Anaplasmosis is a global infection, occurring in North America, most of Europe and eastern Asia. Ticks from the Ixodes persulcatus-complex are the vectors: I. scapularis in the northeastern and upper Midwestern regions of the United States; I. pacificus in the Pacific Northwest; I. ricinus in Europe and I. persulcatus in Asia. A. phagocytophilum is maintained in nature by cycling between these ticks and various small mammals, primarily mice and other small rodents. Because Ixodes ticks are also the vectors for Lyme disease, babesiosis and tick-borne encephalitis, Anaplasma coinfection with these other diseases can and does occur in humans.
In the last decade, cases of HGA have outnumbered those of HME in the United States. Similar to HME and human ewingii ehrlichiosis, the median age of patients with HGA is around 50 years old. Over 4000 total cases have been reported in the CDC’s Morbidity and Mortality Weekly since the disease became nationally reportable; as with most tick-borne diseases, the true incidence is suspected to be considerably higher.
Signs and Symptoms
The clinical course of HGA is very wide, ranging from asymptomatic infection to fatal disease. When initial symptoms appear, usually 5-10 days after tick bite, they are largely non-specific and similar to those of HME: fever, chills, severe headache and myalgias. Nausea, cough and arthralgias also occur. Rash is uncommon but has been reported.
Compared with HME, HGA appears less likely to involve the central nervous system, but peripheral neuropathies are more common and can last weeks to months. Among the neurologic findings reported in the medical literature are facial palsy, demyelinating polyneuropathy and brachial plexopathy. Respiratory distress syndrome and a septic or toxic shock-like syndrome have been reported, but appear to be less common than in HME. The overall fatality rate from HGA also seems to be slightly lower than that of HME, with most of the deaths resulting from opportunistic infections (for example, herpes simplex esophagitis, Candida pneumonitis, and pulmonary aspergillosis) in immunocompromised patients.
Diagnosis
Standard blood tests in HGA usually reveal findings similar to those seen in HME: leukopenia, thrombocytopenia and liver function abnormalities (elevated transaminases). However, the hematological abnormalities frequently resolve by the second week of symptoms, so their absence should be interpreted in that context if patients are presenting later in the course of their illness. In general, empiric antibiotic treatment should be considered for patients in endemic areas who present with an acute febrile illness suggestive of HGA.
For specific diagnosis, Wright or Giemsa-stained blood smears have a slightly higher yield than with HME, but are still not optimal for general clinical utility, given that there appears to be a wide variation (25-75%) in the sensitivity of these tests in visualizing morulae in host neutrophils. More helpful, but not always available, are polymerase chain reaction (PCR) tests, which are estimated to have a sensitivity of 67-90%. Prior antibiotic therapy dramatically reduces the sensitivity of both  of these diagnostic methods.
Serologic testing is useful to confirm the diagnosis of anaplasmosis. The most commonly used method is indirect immunofluorescence (IFA) of IgM and IgG anti-A. phagocytophilum antibodies. Seroconversion is perhaps the most sensitive laboratory evidence of A. phagocytophilum infection, but is not always obtained in a timely enough manner to provide useful input on clinical (i.e., treatment) decisions.
Treatment
The optimal dose and duration of antibiotic treatment for anaplasmosis has not been definitively established, but it is clear that A. phagocytophilum is highly sensitive to tetracyclines. Thus, oral doxycycline is the recommended treatment, at the same dose used for Ehrlichia infections: 200 mg/day in two divided doses. The usual treatment duration is 5-10 days, which is extended if there is suspected coinfection with B. burgdorferi, the agent of Lyme disease. In any case, treatment should continue for at least three days after the patient’s fever resolves. Response to treatment is usually rapid; if the patient remains febrile more than two or three days after initiation of doxycycline therapy, the diagnosis should be revisited.
As with Ehrlichia infections, rifampin is used in cases where doxycycline is contraindicated, such as pregnancy or allergy. Rifampin has also been used successfully in pediatric cases, and thus is sometimes employed in mild cases of pediatric A. phagocytophilum infection. If coinfection with B. burgdorferi is suspected in a pediatric case, doxycycline is sometimes used as an initial treatment for 3-5 days, with another antibiotic employed thereafter to complete the somewhat longer recommended treatment period for early Lyme disease.