If you've got questions, we have answers. If you are looking for additional information for a family member or friends, think you have lyme disease, a caregiver, support person, or a Lyme Warrior, please feel free to join us. All are welcome. 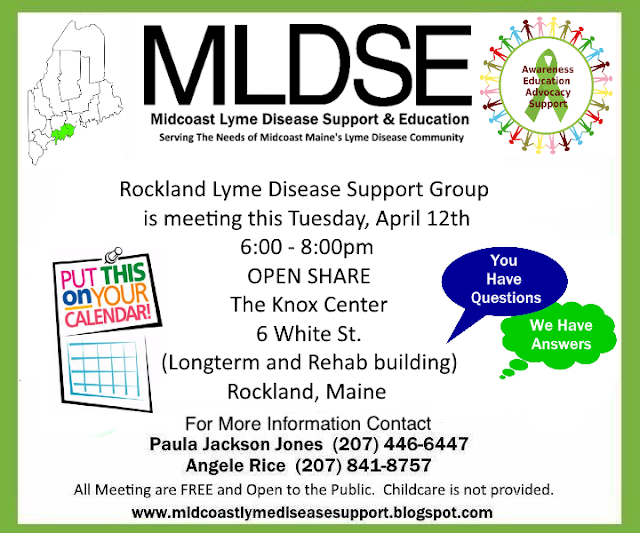 FREE Tick Testing for US Residents

http://www.bayarealyme.org/lyme-disease-prevention/tick-testing/
FREE tick testing for US Residents click the link above for submission information.  Results in 7-10 days and ticks are tested for 6 pathogens.
From their Site:
Free Tick Testing Now Available

"Our goal at Bay Area Lyme Foundation is to provide individuals with free, timely information as to whether a tick they have encountered is — an infected or uninfected tick.

Why Are We Offering Free Testing?

Sending us your tick(s) allows our scientific researchers to gather data about ticks from all over the United States. Our scientists can broaden their investigations into tick populations and glean information on the current distribution of the major tick vectors and the prevalence of tick-borne pathogens that people encounter in different locations. By sending us your tick(s) you are participating in a citizen science project and national tick-collection/testing effort which will enable our scientists to compare past and potential future distributions of ticks and tick-borne disease. Our hope is that by collecting this data, we may be able to predict where risk of disease is most common.

The tick can be dead or alive, but ideally collected less than 72 hours ago. Put your tick in a small Ziploc baggie with a moist cotton ball or piece of wet paper towel. If you have access to a small vial and alcohol, you can use that instead.  Click on the image at right to download the 2-page PDF, fill it out completely, electronically or print and fill out by hand. Put the baggie and the document in a small padded envelope.

Click here for images of some of the different tick species in North America. Try and identify what species of tick you are sending to us and indicate this in your document. Don’t worry if you can’t determine the species.

It’s important to understand a bit about tick testing when you send us a tick:

How long will it take before I get my results?

Typically, we will test ticks and have results within 7-10 business days.

How will I learn the results?

You will receive an email from our laboratory that will detail the species we identified, and the list of positive and negative results.

What if I have questions about the findings?

Please feel free to contact the lab with any questions regarding the findings. Use the report number in the subject heading of an email so that we may track your report and respond in a timely manner.

Lastly, when you send us a tick, you will be asked to download, fill out and print out this form and send it to us WITH your tick. You must complete the form in full and sign it correctly."

https://bangordailynews.com/community/second-annual-midcoast-lyme-disease-support-and-education-conference-on-april-30/
WISCASSET, Maine — Midcoast Lyme Disease Support & Education, a nonprofit 501c3 organization that raises awareness, fosters education, advocates for change and provides local support and resources to Midcoast Maine’s Lyme community, will hold its second annual Midcoast Lyme Disease Support & Education Conference 8 a.m.-5 p.m.  Saturday, April 30, at Wiscasset Community Center.
Doors open and registration begins at 7:30 a.m. There is no pre-registration and there is no charge.
Speaker line up includes:
– Pat Smith, president of the Lyme Disease Association who will speak on the state of Lyme Disease as it effects our entire nation and where Maine fits into the picture.
– Dorothy Leland, VP of Education and Outreach for Lymedisease.org and author of “When Your Child Has Lyme” will speak on when Lyme Disease affects the whole family.
– Maine Association of Naturopathic Doctors (MAND) will hold a Q&A panel of doctors taking questions from the audience and will address the role of naturopathic medicine in managing Lyme and tick-borne diseases.
– Dr. Sheila Statlender, PhD, a clinical psychologist, will introduce the role of the mental health practitioner in assessing and treating tick-borne diseases.
– Bob Giguere will representing Igenex, the leading reference laboratory that specializes in state-of-the-art clincial and research testing for Lyme Disease and associated tick-borne diseases, speaking on the current Lyme testing methods.
– Keynote speaker is Dr. Daniel Cameron, MD, MPH, immediate past president of International Lyme and Associated Diseases Society, who is a nationally recognized leader for his expertise in the diagnosis and treatment of Lyme disease and other tick-borne illnesses. For more than 25 years, he has been treating adolescents and adults suffering from Lyme disease. Dr. Daniel Cameron & Associates, located in Mount Kisco, N.Y., has been serving patients since 1987. He also is affiliated with Northern Westchester Hospital in Mount Kisco. Within a year of opening his practice, Dr. Cameron, a board-certified internist and epidemiologist, began treating a growing number of patients exhibiting persistent, recurrent symptoms, including neurological manifestations, caused by chronic Lyme disease. He has since treated thousands of Lyme disease patients and become a pioneer in the field.

After receiving his medical degree from the University of Minnesota Medical School in 1981, he earned a master​s​ degree in public health from the University of Minnesota, which focused on chronic illness. After completing residencies at Beth Israel Medical Center and Mt. Sinai School of Medicine in New York City, Dr. Cameron served as Assistant Professor of Medicine in Geriatrics at the New York College of Medicine. He has also been heavily involved in clinical research.

His interest in research and teaching continues at his private practice where he manages the Lyme Disease Practice and Research (LDPR) project and mentors health care practitioners interested in learning more about Lyme and tick-borne diseases. Physicians and practitioners, from across the country, visit his office to receive on-site training and education in diagnosing and treating all stages of Lyme disease. Meanwhile, ongoing clinical trials are performed through the LDPR in an effort to improve the level of care for Lyme disease patients.​
​​

Along with the impressive speaker line-up, there will be more than 25 vendors offering products and services to those affected by Lyme and tick-borne disease.

This conference promises to deliver information, education, answers, direction but above else — hope that those affected by Lyme and tick-borne diseases can find their way back to health and wellness.
For information about the conference or MLDSE, visit the website at www.midcoastlymediseasesupport.blogspot.com

This post was contributed by a community member, Paula Jackson Jones

MLDSE's very own, Paula Jackson Jones, once again advocating on behalf of Maine's Lyme Disease community with Dr Bea Szantyr and Vicky Delfino today on MPBN. Click the link above to listen to their interview or read the transcript of their conversation below.

A new study published in the New England Journal of Medicine has found that long-term use of antibiotics is not an effective treatment for people with persistent symptoms of Lyme disease.
Last year, Maine passed a law that protects physicians who use the controversial treatment from facing sanctions.
Some physicians say this new study puts to bed the question of whether long-term antibiotics should be used. But those affected by persistent Lyme symptoms say the study isn’t the last word on the issue.
It was 2007 when Victoria Delfino of Windham was diagnosed with chronic Lyme or, as the Centers for Disease Control calls it, Post-Treatment Lyme Disease Syndrome. Delfino says she had experienced symptoms for years — chronic pain that she attributed to being an athlete when she was younger.
Then, one day, she needed to mail an envelope. It was a simple task that she couldn’t figure out.
“I didn’t know what to do with different denominations of stamps to figure out the postage to put on an envelope,” she says.
After testing confirmed the presence of Lyme, Delfino’s physician prescribed long-term antibiotics. Delfino has been on antibiotics much of the time since 2007, as well as naturopathic supplements. And she says she has improved.
“So I went from being bed-ridden for about a year, to being able to sort of function on some days,” she says. “And some days, I basically still do stay in bed.”
But a recent study published in the New England Journal of Medicine concluded that long-term antibiotic treatment does not improve health for those with persistent Lyme symptoms.
The randomized study was the largest ever done to test the use of long-term antibiotics for Lyme. Two-hundred eighty people in Europe with persistent symptoms were divided into three groups. Two groups each received a different antibiotic therapy for 12 weeks. The third was given a placebo.
“The study shows no benefit beyond what one would expect to find with the placebo effect,” says Dr. Phillip Baker, the executive director of the American Lyme Disease Foundation in Connecticut.
The study found that all three groups did report improvement in their symptoms, but the improvement was about the same in each group, including the placebo group.
Baker says this is the fifth study to find no benefit to long-term antibiotics for persistent Lyme symptoms.
“It’s not a good thing for anybody to be on any medication for a long period of time if you don’t really need it,” he says. “And the need here has not been established.”
“They’re sort of overlooking the fact that everybody improved in a statistically significant way,” says Dr. Beatrice Szantyr, an internist from Lincoln and the medical advisor to Maine Lyme, a nonprofit advocacy group.
Szantyr says the study gives her no definitive answers, and she questions the length of the 12-week antibiotic treatment.
“I’m not sure we know what long enough is, and what constitutes an adequate trial,” she says. “And there there were no combinations of antibiotics used. It was very — it was without nuance.”
Szantyr isn’t suggesting that those with persistent Lyme symptoms should automatically be given years of antibiotics. She says physicians should evaluate each patient individually.
That’s a view shared by Paula Jackson Jones, the co-founder of the Midcoast Lyme Disease Support and Education Group.  (501c3 non-profit)
“The answer is not always that long-term antibiotics is the answer,” she says. “The answer is that the doctor has to be open to whatever works.”
Jackson herself battled chronic Lyme disease. She says for two years, doctors suspected a range of ailments from chronic fatigue to ALS.
In 2011, she went to a doctor who diagnosed her with neurological Lyme. For the next 3 1/2 years, Jackson took natural supplements and received long-term antibiotic treatment off and on. She says she’s been in remission since 2014.
Baker says improvement after long-term antibiotics may be more a function of time.
“Well, you don’t know if they would have gotten better anyway,” he says.
Baker says effective treatment for persistent Lyme requires more research. Until then, he suggests using a multidisciplinary approach recommended by the Institute of Medicine to treat chronic pain.
Delfino says she wants to see those on opposing sides of the long-term antibiotic issue to work together, so the people stuck in the middle — the patients with persistent Lyme — can get the treatment they need.

Please take note, we will be meeting for this month only in Midcoast Hospitals Morrell Boardroom which is right around the corner from the conference rooms.  Please look for our MLDSE green signs to guide you.  We hope to see you there! 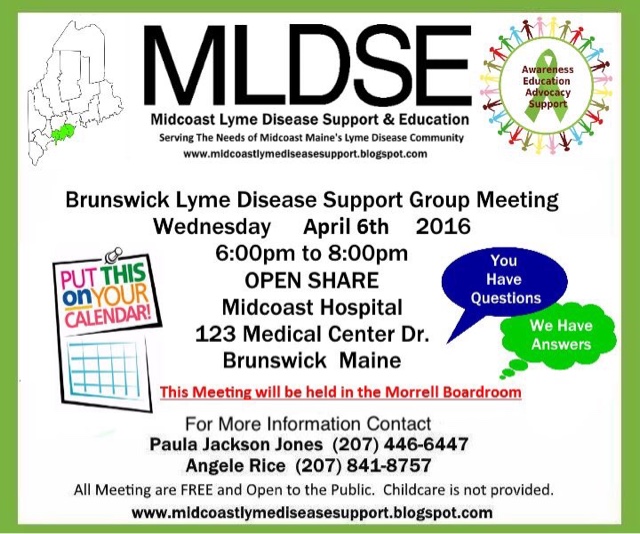